Following the recent launch of the LF350 digital label finishing machine, the British made Eclipse range is seeing increased success across the worlds label producing markets.

The Eclipse range of digital label finishers has quickly established itself due to the unique place it has in the market. The first of the range, the LF3, was the first true ‘table-top’ finishing machine that had a host of the specifications more common on larger models – lamination, single point registration and the ability to handle large rolls of media being amongst them. It was the arrival of the LF350 though that really put this brand on the map. The first ‘bridge’ machine from this British manufacturer, the LF350 sits just as easily in the small order market as it does in the bulk order sections of the industry and has all the hallmarks of the Eclipse brand – high productivity, low cost and finished to testing industrial standards. Recently launched at the spring/summer exhibitions, we can now reveal that this machine has not only helped establish the brand in the UK but across Europe and, indeed, the world with sales in the Middle East, Asia and the USA. 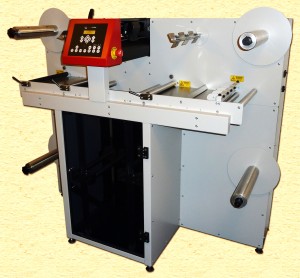 Roy Burton, MD of design, manufacture and distribution company Impression Technology Europe (ITE) said “We approached the Eclipse project with a clear view of what we wanted. We had identified the fact that a small footprint, low investment label finisher just wasn’t available and yet the demand was. With the growth of the small order market the LF3 was the obvious machine to start with but it soon became apparent that larger digital label printers were also looking for something like this albeit with a higher specification. The result was the LF350 which we launched at this year trade shows”. He continued “We thought the response would be good but even we were taken by surprise with orders being placed at the very first showing of the machine when all we had was the exhibition model with actual production still a few months away”.

The production lines are now rolling with ITE pleased to announce that models have been, or are about to be, despatched to markets as diverse as Dubai, Malaysia and America as well as the ‘closer to home’ markets of Europe and, of course, the UK. It is not just sales that are going well either because the quality of this machines has engendered a sort of ‘I want to supply this’ attitude with new distributors being appointed in a variety of countries. This is obviously good for designer and manufacturer Impression Technology Europe but it also shows that team GB is performing well on the world label stage. The Eclipse range was designed, developed and manufactured in Britain and its success demonstrates that, not only is the market in a good position, but also that innovation is still strong in the GB label market. Roy Burton said “The machine itself (LF350) impressed at every show we exhibited at and when the quality of manufacture together with the specification list was matched against the capital cost then the interest level increased even more. We are incredibly proud of these machines and the fact that they are a home grown product”. The LF350 has an impressive list of specifications including supporting media width of 100mm to 350mm and an incredible ability to cut up to a 800mm long label. The twin cutting blades that are standard on this machine have individual depth control and are supported by 5 slitting blades giving amazing flexibility and productivity. Supported and unsupported lamination handling is standard and the machine has double dancer bars for paper feed with positional intelligence as well as full waste matrix removal. All in all quite a spec’ list for such a competitively priced machine. Taking all of this into account it should be no surprise that not only is the LF350 a success but that the whole brand is setting new standards in label finishing.

For more details of the Eclipse range or to find your nearest distributor e-mail info@impressiontechnologyeurope.com or telephone +44 (0)1623 861173

BPI cuts waste levels by one third in six years