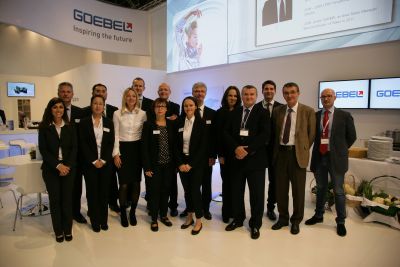 Darmstadt, October 2013. “Keep your eyes open – Together for an innovative future”. Under this motto, GOEBEL presented itself at this year’s K plastics trade fair in Düsseldorf. One world first and the absolute highlight of the trade fair was the GOEBEL MONOSLIT GIANT, a slitter rewinder with which film webs up to 12,000mm wide can be converted at a record speed of 1,500m/min for the first time. The innovation was presented at the GOEBEL trade fair booth on an impressive and specially integrated 3D mapping wall, allowing the Darmstadt-based mechanical engineering company to prove its expertise in pioneering technologies once again.

“We are delighted that our appearance at the trade fair was such a success and to have had the opportunity to draw attention to our products and above all to the MONOSLIT GIANT and the XTRASLIT 2 in the best way possible. The many enquiries from customers and the large numbers of new contacts to potential customers we made at this year’s K speak for themselves,” said Dr. Ralf Enderle, CEO of GOEBEL Schneid- und Wickelsysteme GmbH. Visitors also showed great interest at the press conference on 18th October, at which the new strategies and future visions of the IMS Deltamatic Group, of which GOEBEL has been part since July of this year, were presented for the first time. Raffaele Ghilardi, President of the IMS Deltamatic Group, on the fusion: “We are extremely proud to be able to call the fusion a great success. We want to make use of our synergies together and thus make an even stronger impression in international competition.” This point was also emphasised by Stefano Manfredi, Executive Vice President Marketing & Sales of the IMS Deltamatic Group, who is responsible for the corporation’s strategic orientation. “Our top-class team and strong partners will allow us to offer optimum tailored solutions for our customers around the world. It is particularly important to us that we are able to draw on GOEBEL’s many years of expertise as a successful traditional company, remain in Darmstadt and retain key initiators from the field of mechanical engineering. Contribution to the group is important and allows diversifications.” Another highlight of the conference was the presentation by GOEBEL Sales Director Harald Knechtel, who introduced the MONOSLIT GIANT. He showed the slitter rewinder in an impressive film, including how it was commissioned at the China Soft Packaging Group and immediately impressed with its premium quality and processing speed.

Apart from GOEBEL, Turra and Rotomac were also present at this year’s K trade fair with their own appearances. Turra presented two trade fair firsts – the ST-60 and the RT-60 – from the vertical injection press segment at its booth. The innovation shown by Rotomac was the model 148 – the automated slitter rewinder for the production of plastic film rolls as well as of micro-embossed aluminium rolls for domestic and catering use.

PST technology to the rescue