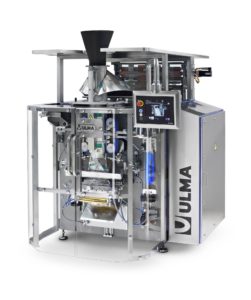 A new vertical form fill and seal system (VFFS) has been launched by Ulma Packaging that can transform the packing of fresh herbs and light leaf salads to save producers time, money and reduce manual intervention to a minimum during the packing process.

The patent-pending VTI640V VFFS solution, designed by Ulma, uses a device that pulls the product down to the bottom of the bag (with air), at speed, before sealing it, without damaging the herbs. The herbs can become damaged if handled roughly or if they become blocked in the forming tube of conventional packaging machinery.

This equipment, which ULMA says offers exceptionally quick payback, is already making an impact in the fresh produce sector in Europe and is now also available to UK companies keen to reduce their reliance on manual labour and re-work caused by ‘product in seal’. The new design function can mean the VTI640V could be a cheaper alternative to Ultrasonic sealing, as the product sits lower in the bag and away from the seal area on sealing.

A conventional herb packaging system may need as many as 16 staff members to place the product onto scales, a conveyor belt and then at the end of the line, to squash the herbs down to ensure they fit into a bag — which increases the risk of damage to the product.

With Ulmas’s VTI640V system it takes just two employees to run the line and it results in higher outputs. One person is needed to operate the system and the other to load the machine, making this option more cost effective and reducing the risk of product spoilage that can occur with manual handling.

ULMA’s VFFS business manager, Steve Brooks, said, “The VTI640V is massively cost effective with potential payback of less than six months. Our system essentially involves virtually no human contact with the product so it offers a much faster and efficient production process with less potential damage to the product, as herbs don’t take too kindly to operators handling them.”

A reduction in waste and labour costs makes the VTI640V VFFS a win-win situation for the fresh produce industry. As Brexit approaches, it is feared that the potential for staff shortages that are associated with the UK leaving the EU could have a dramatic impact on the food industry, particularly with fresh produce, so turning to automated packaging systems may help alleviate reliance on manual labour.

In addition to the VTI640V VFFS, Ulma, part of the Mondragon Co-Operative, has a range of packaging technology ideal for fresh produce, including the recently launched TSA 680 P and TSA 875 P automatic tray sealers. Both of these robust machines are built to handle the most demanding requirements for the sealing of preformed trays of fruit and vegetables.

Attracting the brightest and best to the design and print industry