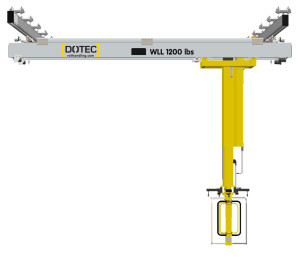 “We were impressed with the functionality and ease of using a Dotec” – Darren Gaunt, Production Manager, Synergy Health (UK) Ltd

Established in 1981, Dotec’s reel and roll-handling range, marketed under the name Lift Assist, is the widest on the market and includes rotary action roll handlers (horizontal to vertical and reverse) and single action (horizontal or vertical), both types having a capacity of 50 – 250kg.

In August 2015, contact between Synergy Health (UK) Ltd and Dotec was established via systems and equipment supplier Jarshire Limited, Dotec’s exclusive UK and Ireland agent. As a result, Dotec was invited to consider a customised system to meet a specific requirement at the Synergy Health manufacturing facility in Chorley. The handling capacity required by Synergy Health fell exactly between two existing Dotec roll handlers; the RH90 being considered too light, the RH200 too heavy. In order to provide the best solution, a brand new handler was therefore required. In Dotec’s innovative way, the company subsequently designed a new roll handling and crane system that not only provided a complete answer to the Synergy Health need, but also complemented its own roll handling portfolio. 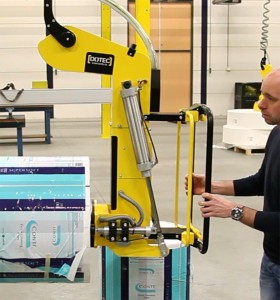 Designated the RH140, the new model is designed for applications in the Flexible Packaging, Labelling and Non-woven Hygiene markets, providing efficient and multi-functional roll handling up to 140 kg.

After thoroughly discussing their handling requirement and considering the Dotec proposal, Synergy Health decided to pay a visit to Dotec’s factory in Holland. As a result of the tour by Wouter Verhagen of Dotec and David Smith of Jarshire, and a demonstration of multiple roll handlers and handling equipment for various other applications, Synergy Health was convinced that they had found the right partners for their project.

With the new handler in the pre-assembly stage, Dotec met Synergy Health again at the PPMA show in Birmingham where, in conjunction with Jarshire, Dotec were exhibiting for the second time.

“The stand design and the staff were impressive and, during demonstrations, you could see first-hand the functionality and ease of using the demonstration lifter”.

This visit engendered further enquiries for handling equipment which highlighted the Synergy Health confidence in Dotec. After discussing multiple solutions, an onsite visit at Synergy Health was paid jointly by Dotec and Jarshire.

In mid-December the new handler was ready for an acceptance test and Synergy Health delegates experienced the RH140 on a newly-designed Jib Crane for the first time. A week later, installation, commissioning and full operator training was positively welcomed by the operators of Synergy Health.

“It is the ease of use that the staff find most beneficial. To lift the weights that we are using in production is effortless for both the staff and the lifter. The general impression is that, both as a company and the machinery it has produced for us, are first class”.

“The equipment benefits us in many ways; the ease of handling and speed at which we can make changes is proving a major benefit bringing about cost savings through higher efficiency. Also, a reduction in roll damage caused during manual operations, and ticking all the health and safety boxes are both massive plusses.” Production Manager, Synergy Health – Darren Gaunt.

What else is new at Dotec?

During the ICE exhibition in Orlando earlier in 2015, contact was made with a potential new client who showed serious interest in the company’s Roll Handling solutions. One of the requirements was for a Heavy Duty Roll Handler which, at that time, exceeded the capacity range of existing Dotec handlers.

Taking into account the client’s requirements, Dotec’s engineering department made a quick start and in November the new RH PH550 was born. The RH PH550 is a muscular lifting device to lift and move heavy rolls of 550 kg with as little effort as possible from the operator. Together with a triple-power tractor drive, the heavy system has already proved very successful. Dotec Lift Assist solutions are designed to meet all Health and Safety requirements and cover any application in the company’s weight range.

Formed in 1979, Jarshire has represented Dotec in the UK since 2012. Jarshire’s equipment portfolio and experience makes them a leading one-stop source for converting equipment, components and machinery.

Narrow Web Corona Treaters and the importance of correct maintenance

Narrow Web Corona Treaters and the importance of correct…