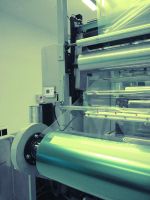 Because most converting processes involve high speed webs of material, static charges are an inevitable side effect. They only become a problem when they’re uncontrolled and lead to lost production.

Static arises when an external force – generally friction, pressure or separation – causes an electrical charge to move from one material to another, leaving one positively charged and the other negatively charged.

The size of charge depends on contributing factors including the speed and force of the friction, pressure and separation: increased force or faster processes cause larger charges to be generated. If one of the materials is conductive it won’t hold the charge but if the material is non-conductive the charge is unable to move across the surface, creating a static ‘pool’ of electrical charges. For converters, uncontrolled static presents a variety of problems:

–       Product misbehaviour: because most commonly used packaging materials are non-conductive, friction and separation involved in processing generates static charges that can cause blockages in the most modern machinery.

–       Dust attraction: airborne particles are attracted to charged surfaces. This can lead to high reject rates and rework levels.

–       Operator shocks: the static voltage that causes an unpleasant shock when getting out of a car is around 15kV. Levels of 30-60kV are commonplace in converting, causing acute discomfort and due to the recoil effect, increasing the risk of more serious accidents.

–       Fires and explosions: if a process takes place in a combustible atmosphere, static charges can cause ignition.

Charges are almost always generated as the substrate leaves the reel and travels through the first converting stage – often by a relatively simple procedure such as slitting it down to narrower widths. The real production hurdles occur after this point. During rewinding, static can affect the tension so much that contact or even close proximity, with other surfaces results in contamination by dust and dirt. It has been known for the web core to be crushed or fall out altogether because the tension of the web has become so extreme. Contamination is a major issue where the packaging calls for completely clean substrates – for example, in the pharmaceuticals industry.

So how can you prevent static? Static will be more severe on a cold, dry day; some companies see productivity fall by as much as 20% during the winter compared to the summer. Keep an adequate level of moisture in the atmosphere and avoid subjecting the stock to extremes of temperature prior to printing. Ideal conditions for paper stock are a relative humidity of 52% and temperature of 21oC. If the ambient relative humidity falls below 35% the conductivity of absorbent materials falls significantly and the static electricity increases. However, correct storage alone will probably not be sufficient, especially when working with plastic webs, so consider installing a static elimination system.

The technique employs high voltage AC or Pulsed DC to produce ionised air to neutralise surface charges. In both, the voltage is fed to an array of titanium emitter pins mounted on an ionising bar. This creates a high-energy ‘ion cloud’ of a large number of positive and negative ions.

In its AC guise, as the AC cycle changes positive or negative ions are produced in approximately equal quantities and a statically-charged surface of either polarity passing close to the cloud is quickly neutralised. An AC system can only generate ions in accordance with the AC frequency. Pulsed DC ionisation allows control of both frequency and the relative balance between positive and negative ions.

Meech’s 977CM Pulsed DC controller delivers powerful static control on web paths and rewinds. When used with the optional feedback sensor bar, precise closed loop control of charges is achieved. The sensor communicates with the 977CM unit to tune its output to ensure the optimal charge neutralisation for current operating conditions. In-built performance monitoring controls the high voltage outputs to ensure optimum performance and negate the effects of the build-up of contamination.

When the ionising bar needs to be cleaned, adjustable local and remote alarms alert the operator to do so. The easy-to-use keypad on the front of the unit enables the 977CM to be set up to maintain the optimum output of the ionising equipment while a lock facility prevents unauthorised or accidental alteration of the desired settings. In addition, data can be collected and transmitted to allow remote monitoring and logging for quality assurance purposes.