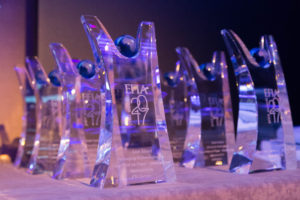 The manufacturer, which has sites in Scunthorpe and Ilkeston, was recognised in the technical innovation and in the creative use of flexographic categories for its ‘in register’ holographic bubble, rainbow and sparkle effects.

The judging panel, made up of industry representatives from a cross section of printers, suppliers, brand owners and retailers, praised Skymark for its far-reaching innovation in flexible packaging, something not seen for some time. The high quality and creative effect from Skymark can enhance existing designs and add value to any product.

Paul Neath, Skymark director said: “It is great news that our capabilities and commitment to creating new innovative effects have been recognised at these awards. It is a fantastic recognition of our efforts from the industry and we’re immensely proud.”

Many companies who have previously offered the holographic effect process are based in Eastern Europe and the Far East. Skymark is currently the only UK based printer able to create this solution – an in register, patterned holographic effect for flexible packaging.

The EFIA Annual Print Awards recognise excellence in flexographic printing across a number of skills and techniques. The gala dinner was held at the Vox Conference Centre at Resorts World in Birmingham on March 16, 2017.