Shin Han, which was established in 1981 by CEO Mr Jae-Gil Yoo, has expanded to become a supplier of complete extrusion and laminating lines. Initially specialising in cast extrusion before moving into lamination in 1984, the company also began to manufacture rotogravure printing presses in 1987 and exported its first machine in the early 90s around the time it developed its solvent-free lamination technology. Today, the company sells its machines in Thailand, India, Indonesia, China, and the Philippines, and has a growing demand in Vietnam 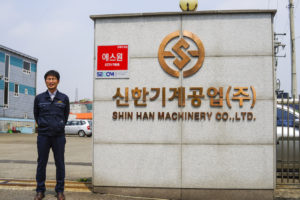 But, it was with a view to acquiring the CE and UL accreditations that will allow it to develop its export business into Europe and North America, that the Korean based manufacturer has nominated Danish pioneers Vetaphone as its preferred supplier of corona treatment technology. Key to this decision, according to Mr Yong Wan Kim, managing director at Shin Han, is the immediate reaction from Vetaphone in response to customer requirements, which coupled with reliable performance, makes the total cost of ownership a far better proposition that specifying lower cost corona treaters, with a faster ROI.

Shin Han’s comprehensive range includes rotogravure printing presses, capable of 300m/min on paper, film and foil substrates. It manufactures several different types of laminators, including extrusion (LDPE, PP, EVA, EAA, Ionomer, and Surlyn), and dry and solvent-free models, all with a web width of 1300mm and capable of speeds from 200m/min to 400m/min. It also manufactures slitter rewinders and inspection rewinders, as well as number of specials, such as combi and tandem extrusion lines that use two processes, and all inline.

Speaking for Shin Han, Mr Kim explained the company’s association with Vetaphone. “We became aware of Vetaphone’s technology a few years ago and have always appreciated its wealth of knowledge and excellent response to any request we have made, which is essential in the negotiations we have with our customers.” Highlighting Shin Han’s commitment to quality, Mr Kim said that the importance of using quality co-suppliers could not be under estimated. For this reason, he chooses to work only with the best in each field because he knows that poor performance of any component, however small, will reflect badly on Shin Han in the customer’s eyes. “If we are selling quality, we need to guarantee it, and that cannot be achieved if the buying decision is based on cost alone,” he stated, emphasising the importance of taking a long-term view of investment.

Now with five Shin Han machines in the market, fitted with Vetaphone technology, he can judge from first-hand experience how consistent quality and reliability are crucial to productivity in today’s pressurised production environment. “We cannot afford to have a machine failure caused by an unreliable component, so solid after sales support is a major part of the buying decision. With Vetaphone’s global coverage, we know we have a true partner that will also support our customer, the end user, and that is important to our reputation,” he added.

Currently employing 24 staff at its 35,000sqm facility near Seoul, Shin Han, which is still owned by its founder, generates annual sales of around US$8m from its comprehensive range. Typically, this will include 2-3 gravure presses, 3-4 extrusion laminators, 2-3 dry laminating and solvent-free laminators, and 4 slitter rewinders each year. Looking ahead, Mr Kim sees more development in solvent-free lamination, and the establishment of key alliances to extend the company’s business in new export markets, including Africa and South America.

Davis-Standard ingenuity for high-growth markets at…