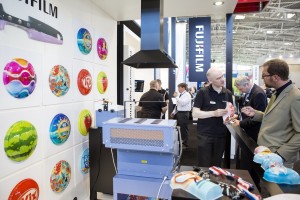 Following three successful show and conference days, the second InPrint event closed its doors on November 12. A total of 3,400 visitors from 68 countries attended the Munich Trade Fair Centre to learn about cutting-edge technology, components and services for speciality, screen, digital, inkjet and 3D.

In line with the exhibition’s target, the programme of over 60 conference sessions, that took place on two stages directly on the show floor, also gathered crowds of visitors. The Italian company Kuei won the Great Innovations Award 2015 for its invention ‘Haptink’, which is a specially formulated haptic ink that creates a 3D printed effect for wood decoration.

In addition, a further 1,324 visitors of the co-located productronica show made use of the offer to visit both shows with one combined ticket. During this year’s InPrint show, 150 companies from 16 countries showcased their products and services on 5,500 net square metres.

Frazer Chesterman, InPrint founder and co-organiser, summed up: “What we have seen from the 2014 show to 2015 is a rapid development and evolution of the market. Larger exhibition stands, refined messaging, more machines, different inks and coatings and amazing technological innovation across a diverse range of applications. Clearly, the InPrint show continues to reflect this market evolution.

“When I spoke to exhibitors, I heard the same comments over and over again, that this event delivers a unique audience of visitors looking for customised system and technology solutions from both manufacturing and print sectors.”

Roberto Zinser, channel manager wide format direct sales at Canon Germany, had also perceived a strong progress: “At InPrint 2015 in Munich, we noticed a considerable increase in the number of high-level talks and new business contacts compared to the year before. It is fantastic to see how digital in packaging, decorative and functional printing is really picking up speed. 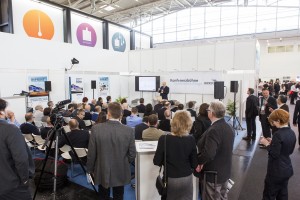 “The InPrint show has become a valuable platform with respect to an exchange of experiences and know-how between visitors and exhibitors. We will certainly miss InPrint round here next year, but are happy for our Italian colleagues and clients and are looking forward to welcoming InPrint back to Germany in 2017.”

56 per cent of the event’s visitors came from within Germany, while the majority of the companies who exhibited at the show, 54 per cent, are located abroad with Germany, Great Britain, Italy and Switzerland were represented best among the exhibiting countries at the show. Visitors from the printing sector were recorded as working mainly in the segments of digital print, inkjet and screen.

65 per cent of the visitors named functional print as their main area of interest at InPrint and more than half of all visitors were additionally interested in decorative printing and more than one third in packaging printing as well as in additive manufacturing and 3D. Taking a closer look, most visitors chose to visit InPrint in order to find out about printing machines and systems.

Marcus Timson, InPrint co-founder and organiser, added: “InPrint is now firmly established as a show that is playing a role in assisting the development of industrial printing. Functional printing was of the highest interest for visitors, and as we shift our attention towards Milan, we expect to see an increase in interest for decorative printing.

“For InPrint 2015, the international attendance continued to grow and we expect this to continue into the future as InPrint becomes a truly European event.”

Major names join the packaging parade in the UK

Loftware brings together over 2,100 supply chain and labelling professionals at…

Sabic partners with Jinming and Bolsas to foster flexible…

Loftware brings together over 2,100 supply chain and…