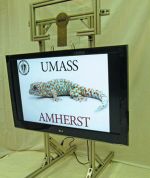 A Gecko-inspired adhesive material has been invented by scientists from the University of Massachusetts Amherst. ‘Geckskin’ was developed after analysing how geckos adhere to walls.

“Gecko feet can be applied and disengaged with ease and with no sticky residue remaining on the surface,” explains biologist Duncan Irschick.

The researchers are aiming to take the same properties used by the gecko such as high-capacity reversibility and dry adhesion to develop materials that can attach objects such as TVs to a wall.

“Our Geckskin device is about the size of an index card and can hold a maximum force of about 700lb [320kg] while adhering to a smooth surface such as glass,” says Alfred Crosby, the scientist who heads up the polymer science and engineering lab where the material was made.

The material enables devices to be easily released with little effort and reused many times with no reduction in performance. For example, it can be used to stick a 42in [107cm] TV to a wall, released with a gentle tug and stuck to another surface as many times as needed, leaving no residue.