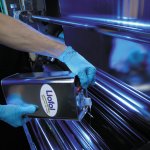 With the introduction of a new Liofol brand laminating adhesive, the Henkel company is showing the way to replacing isocyanate-containing adhesives in the production of flexible food packages. In an interview, Michael Gierlings, technical commercial service manager Liofol at Henkel, told Converter about traditional adhesives systems and new alternatives.

Converter: In practice, the adhesives used to produce flexible food packages are mainly PUR types, which contain isocyanates as basic building blocks. What risks do these substances pose for consumers?

Gierlings: In Europe, there are stringent regulations governing the manufacturing of food packages. They stipulate that food packages or individual components of a package must not affect the contents of the package in any way that could give rise to toxicological concern. This obviously also applies to the use of flexible packages. These are made by combining different materials such as plastic films, metal foils and paper into laminates. To bond the individual materials to one another, the current practice is to use mainly polyurethane adhesives based on isocyanates. When fully cured, these adhesives are safe for human health. However, if the adhesive has not fully cured when the package is filled, the remaining isocyanate monomers can migrate into the food and react with the water there to form aromatic amines. This group of substances has a pronounced toxicological potential and is classed as carcinogenic by the WHO.

Converter: What does this migration problem mean for packaging manufacturers?

Gierlings: Food packaging manufacturers have a duty to comply with the legal provisions regarding food and must ensure that they have appropriate quality assurance procedures in place to do this. To prevent migration of isocyanate monomers, the adhesives must be given the time to cure fully. Depending on the adhesive used, the film/foil combination and the curing temperature, this can take up to three weeks. Generally speaking, the lower the isocyanate content, the shorter the cure time will be. The time factor is of major significance to packaging manufacturers, because long cure times mean that working capital is tied up, which has a negative impact on costs – especially in highly competitive businesses. So it’s not surprising that the industry is on the lookout for faster systems.

Converter: Henkel has now launched the first isocyanate-free laminating adhesives on the market. What are the benefits compared to traditional adhesive systems?

Gierlings: Our goal was to develop an adhesive that would enable just-in-time manufacturing of flexible packages. And without the slightest risk to consumers in terms of the adhesive! Time is money, and this is why we have formulated a truly unique one-component PUR laminating adhesive called Liofol FastOne LA 1640-21 that cures fully in just one day. Laminate on Monday, fill safely on Tuesday – even rush orders can now be met quickly. This development leap was made possible by a new non-isocyanate technology, which neatly sidesteps the whole isocyanate migration problem. Regarding migration in general, it is important to emphasize that none of the substitute substances used in the new adhesive are subject to any specific migration limits according to food legislation. So users can be sure that they will not be exchanging one problem for another.

Converter: Up to now, two-component adhesives were the standard for manufacturing flexible packages. What advantages does the new one-component solution from Liofol offer?

Gierlings: Packaging manufacturers who rely on reactive two-component systems normally have to wait at least three days before the laminate meets the quality requirements for further processing. Before then, there will not be sufficient adhesion between the layers or the necessary temperature stability for sealing. When compared directly, a one-component adhesive like Liofol FastOne, significantly accelerates the manufacturing process. The new solvent-based laminating adhesive Liofol FastOne LA 1640-21 cures chemically, which eliminates the need for time-consuming – and possibly wrong – mixing. In addition, it has a considerably higher initial tack. Printing, cutting and laminating can now be done without problems in one single step. Before the following sealing operation, the laminates need only a very short cure time to make sure that they have the mechanical strength to withstand the stresses of the downstream process.

Converter: The booming market for flexible packages has triggered a spate of new adhesive technologies in recent years. What demands will modern adhesive systems have to fulfill in the future?

Gierlings: From an economic point of view, reducing the manufacturing time is obviously the most important criterion. At the same time, quality requirements are increasing, and not just in Europe, but also among packaging manufacturers in emerging markets. With Liofol FastOne LA 1640-21, we have developed a product that meets these demands. Furthermore, the trend toward sustainability will continue to grow. Eco-performance will clearly be a big factor in the future. Because of this, we are aiming to offer the new Liofol technology in a solvent-free version as soon as possible. However, the new Liofol adhesive already offers a plus in this respect: solvent from the solvent recovery system can now be fed back directly into the production process without needing purification. This saves money and is good for the environment, too.

KEEPING THE LIDS ON

Davis-Standard ingenuity for high-growth markets at…