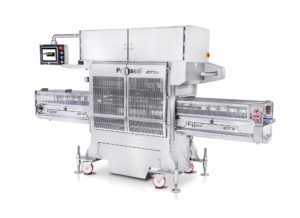 Heat sealing specialist, Proseal, has received a supplier award from Sainsbury’s for its work with DuPont in running a series of sealing masterclasses to help the retailer deal more effectively with complaints about seal failures. According to Sainsbury’s, the initiative has resulted in a double digit reduction in complaints.

Sealing is the main cause of Sainsbury’s packaging complaints, with typical issues including sealing breaches, sealing failures and even imploding seals. Following an initial briefing from DuPont to the Sainsbury’s packaging team on the causes of sealing failures and how to avoid them, Sainsbury’s decided that its supply base would also hugely benefit from this knowledge. Sainsbury’s and DuPont therefore teamed up with Proseal, as one of the leading manufacturers of tray sealing equipment, to create a sealing masterclass.

The class focuses on two key aspects of sealing: polymer science and good heat seal practices. The polymer science examines how plastic film is able to stick to the wide variety of materials used for food trays including plastic and smooth wall foil and board, and explains how the contact time of the film to the tray and contact temperature can vary.

Heat seal best practice looks at machine and heat seal tool design and the different nuances that need to be taken into consideration depending on the tray material. It also focuses on the importance of good housekeeping for the machine and tooling, and details issues on a production line that can affect seal quality.

“As a business double digit complaint reduction is something that we rarely see,” said Debbie Parry, Sainsbury’s brand packaging technologist. “The support that Proseal and DuPont have given us with these masterclasses has been very much appreciated.”

Although not a direct supplier to Sainsbury’s, the work and achievement of the two companies were recognised by a special award at its recent supplier awards.

“This was a total surprise but one that we were extremely proud to receive,” said head of sales and control systems, Proseal, Tony Burgess.

“Sealing technology has advanced a great deal in recent years and Proseal continues to be at the forefront of developments to ensure food manufacturers can achieve the consistent seal quality and reliability that their customers require. We have been delighted to be able to share our best practice knowledge and advice with the supplier base at Sainsbury’s.”

SCEA goes for growth with investment in BOBST gravure technology