Productive way to make a profit 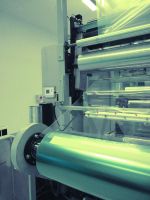 Dust contamination presents major problems for converters as they need to further reduce waste while their customers demand ever higher quality standards.

Static control is a key area for Meech, delivering innovative AC and DC solutions to customers in the converting industry involving processes that typically have issues with static electricity including film sheeting and slitting, winding/rewinding and flat and wicket bag manufacturing. With more than 45 years experience in electrostatics, Meech pioneered industrial pulse technology with its pulsed DC controller designed to operate alongside all of its static elimination equipment.

“We are seeing a growing trend among customers who want to be able to monitor performance rather than waiting for problems to arise and then trying to fix them,” explains David Rogers, business unit director, static control.

“So often they don’t appreciate the need to do that until they have serious problems and it becomes an urgent issue.”

Static presents particular problems with the production of plastic film. This has become more of an issue as polypropylene has replaced cellophane as the substrate of choice for wrapping. There are a number of cost penalties associated with uncontrolled static electricity in manufacturing processes.

When sheeting or slitting the static charge will cause the material to stick to itself or to the machine rollers and frame resulting in mis-registering of the material which will then have to be scrapped.

Static force can restrict machines to running at much slower speeds because the static charge can cause feed problems or poorly-wound reels which can then be difficult to fit onto customer’s machines. Dust and particulates attracted by high static charge on the web can result in expensive scrap tares especially if the material is to be printed or used in the medical/food packaging industries.

Self-monitoring and adjustment allows optimum control of static for much longer periods than previously possible. Local display and output signals alert operators to the need to clean the equipment. Effective long-range ionisation Unique to Meech, the 976 Pulsed DC Bar is designed to provide highly effective longrange ionisation up to distances of 900 mm. The 993R incorporates a resistive coupling behind each pin, preventing personnel from receiving shocks while eliminating sparking during intermittent operation. This in turn ensures consistent charge generation and along working life.

One customer has found that when using the controller he is able to run his rewinding machines at twice the previous speed and eliminate potential quality problems; time is saved and operators are no longer concerned about receiving shocks due to static build-up.

Meech often receives ‘emergency’ calls from production managers worried about products being contaminated by the buildup of dirt on their rollers and needing an effective solution – and quickly, if they are not to lose work from customers.

“Slitting/rewinding and wicketer bagmaking machinery is now much faster than say 20 years ago.,” comments Rogers “Running at speeds of around 1000m/minute means that that the rate of static has increased so installing static control equipment means high levels of productivity can be maintained.

“An increasing number of OEMs are offering Meech static control systems as on optional extra on their machines because of their reliability, efficiency and superior build quality, one manufacturer of polythene specifying that only Meech systems are fitted to machines he purchases.

“Static control has gone from being something of a niche product to one that is a necessity to meet demands set by users running machines harder and faster to increase productivity,” concludes Rogers.

Fachpack 2019: Meech International to present its newest range of Static Control and…