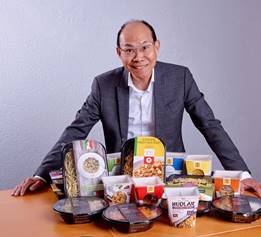 The versatility of Ishida’s market leading QX Flex tray sealers, the quality of its sales and service support, and the company’s ability to provide turnkey line installations are all major factors in the long term working relationship between Ishida Europe and Plaza Foods, one of the Netherlands’ leading manufacturers of oriental ready meals.

The partnership dates back to the early days of Plaza Foods when the company first started to produce ready meals in the basement of its restaurant, Orient Plaza, in Nijmegen and Ishida supplied its first tray sealer. Since then Plaza Foods has continued to expand and now operates from two factories, the most recent of which features two of Ishida’s latest tray sealers, the QX-775 Flex and QX-1100 Flex (twin lane model), together with a DACS-W-012 checkweigher.

Both of the new Ishida tray sealers are handling Plaza Foods’ most popular lines.  The 775 Flex is dedicated to the company’s ‘takeaway’ ranges and the 1100 Flex handles large size 800g and 1kg trays. Trays are gas flushed as part of the sealing process to deliver an extended shelf life for all products.

The QX 1100 Flex is part of a bespoke line designed and installed by Ishida.  This also features a tray denester and conveyors to take trays to the filling system and then to transfer them to the tray sealer and checkweigher, which provides a final weight check. The two separate lanes of the QX 1100 twin enable the machine to reach speeds of up to 80 trays per minute (per lane), although throughput depends on the speed of the filling machine. The QX 775 is running at up to 45 packs per minute. 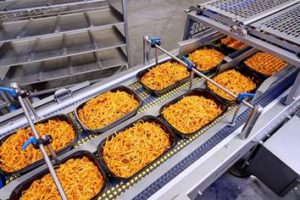 Plaza Foods turned to Ishida shortly after it began producing ready meals when the performance of the first tray sealer it had purchased failed to live up to expectations.

“We have been impressed by the quality and reliability of the Ishida equipment, and what has been equally important has been the high level of support that the company continues to deliver,” comments Yong Li Chang, Plaza Foods’ Managing Director. “We know that if we ever have a problem, this will be addressed immediately by Ishida and production therefore does not suffer.” This is a vital factor for an operation that now produces over 100,000 ready meals every day across its two factories.

The flexibility of the tray sealers in terms of their ease of set up and changeovers and the variety of tray sizes and designs they can accommodate is equally vital for Plaza Foods, which supplies many of Europe’s leading retailers and therefore needs to be able to respond quickly to changing market requirements and customer demands.

“We need this flexibility so that we can be flexible with our customers,” confirms Mr Chang. This is particularly important for the QX-775 in operation at the company’s other factory, which handles shorter production runs.

Plaza Foods’ continued satisfaction with its Ishida equipment has now been further underlined by its recent order for an additional checkweigher as the company continues its impressive expansion.

Coatings Training Institute to be launched in China