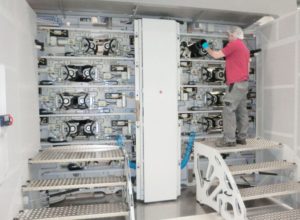 As part of a substantial investment program, Vitra, a GMP and BRC certified Belgian packaging printer and converter, based in Wommelgem, has invested in two BOBST 20SIX CI flexo printing presses and a BOBST CL850 laminating machine.

All new BOBST equipment will be installed in the second half of 2017 extending the company’s capacity. The family-owned company was founded in 1935 and is currently managed by the second and third generations. To ensure the quality of its products, Vitra adheres to strict process control rules from pre-production to post-production with corresponding in-house capacities.

According to Jan Laeremans, Vitra NV managing director, the decision to invest in new equipment was taken two years ago. After evaluating equipment of several machine manufacturers, Vitra opted for BOBST because the existing BOBST flexo presses had been working to the company’s satisfaction. The package deal was closed in December 2016.

The two 20SIX CI flexo presses have exactly the same specifications. Featuring ten colours, a print width of 1050mm, and repeats up to 800mm, they can take on a wide range of flexible packaging printing jobs. Both machines are equipped with the newest 100 per cent inspection systems and inline spectrophotometers, both from BST-Eltromat, which provide Vitra’s customers with consistent quality.

Among the technical highlights of the presses is also the smartGPSTM off-press set-up system that not only reduces waste to almost zero during set-up, but also serves as a quality control instrument for printing hardware and plate mounting.

BOBST laminating machines are known for sensitive web tension control, which allows a very wide range of webs and web combinations to be handled. This is one of the reasons behind Vitra’s recent purchase of a 1350mm wide BOBST CL 850D multi-technology duplex laminator. The machine will replace one of its existing laminators and will join a solventless laminator already in operation in Vitra’s production plant. The BOBST CL 850 will be dedicated to solvent-based applications using either the gravure or the flexo trolleys that have been specified by Vitra for supply. The machine also provides the possibility of coating different types of varnishes and lacquers aimed at maximising the visual appeal of printing or enhancing the substrate’s functional properties required by the type of high-end packaging produced by Vitra.

“The superior transparency of solvent based-adhesives is often the preference with transparent laminates. Here the uniformity of coating must be flawless as even the smallest defects are immediately visible,” explained Jan Laeremans.

“When looking at options, we considered the ability of the BOBST flexo trolley to confer to the end product the required visual uniformity, whilst applying a lower coating weight that has no impact on laminated bond strength. This is one of the machine’s pluses in terms of product quality, alongside the high speed of coating directly on thin aluminium foil without breakages.

“In terms of operational efficiency, we expect it will enable us to increase flexibility and minimise turnaround time, especially on short run production,” Laeremans concluded.

Flint Group announces the acquisition of Eston Chimica in Italy