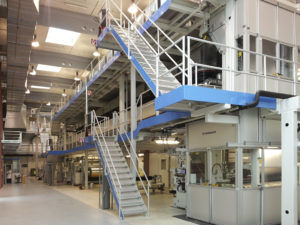 Constantia Teich, part of the Constantia Flexibles Group, is a leading international provider of flexible packaging material. The organization processes raw materials such as aluminum, paper and plastics into packaging materials for the food, animal nutrition and pharmaceutical industries.

Constantia Teich set particularly high demands for their investment in a new coating and laminating line, and extended the specification to simultaneously ensure both the highest product quality and energy efficient operation. To ensure that the new line would simultaneously offer three applications instead of two, the maximum web width was extended to 1900 mm.

Following extensive market research, KROENERT was awarded the contract. The deciding factor, besides the Hamburg company‘s well-known product quality, was the extensive experience it has in the high-speed processing, even at high temperatures, of the thinnest aluminum foils. What counted most in KROENERT’s favor was the in-house Technology Center at the Hamburg company premises. Constantia Teich was able, together with KROENERT experts, to conduct an extensive series of tests at production scale in order to determine the optimum machine configuration for the RECO. This configuration was then implemented accordingly during the construction of the line.

The new coating and laminating line is perfectly aligned to the needs of the Austrian packaging manufacturer. The equipment includes:

Transportation to Austria followed the completion of project planning, manufacturing and pre-assembly of the line in Hamburg. A new complex in Weinberg was built specifically for the line, allowing storage areas and further processing facilities in the immediate vicinity. Under supervision and control of KROENERT engineers the line was assembled, piped and wired and then brought into operation.

After joint test runs and production trials the line was handed over to Constantia Teich Production, and has been in multi-shift operation since then.