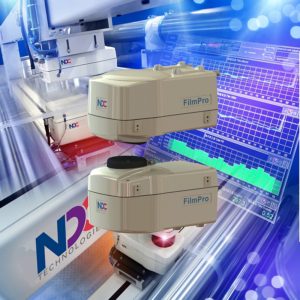 FilmPro is NDC’s most versatile infrared gauge to date, measuring clear, pigmented, voided / pearlized products, plus tints in total or as stripes. It measures the true thickness and weight of voided, microporous or breathable films and derived density. It can measure costly barrier materials, such as Nylon, EVOH or PVDC simultaneously with other polymers such as PE, PP or Ionomer.

An issue confronting the accurate infrared measurement of thin films is called Optical Interference (OI). This can negatively affect the accuracy of infrared film measurement due to reflected light within thin film structures. FilmPro’s new innovative design has an optional Fringe Suppression Optics (FSO) module with a more efficient optical engine that is unaffected by film thickness changes and scanner misalignment or run-out.

For biaxially orientated films, FilmPro provides unique direct thickness measurement of clear, filled or voided / pearlescent films. It addresses the issue of measuring the thickness of voided films and materials that exhibit density variation with its patented optical design, selection of discrete near infrared wavelengths and powerful sensor algorithms that combine to directly measure the true thickness and mass of these films.

Finally, FilmPro can measure organic or water-based coatings on film by simultaneously measuring the substrate thickness and the coating thickness.

What ‘Brexit’ means for the manufacturing industry?