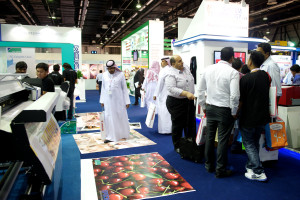 Gulf Print & Pack 2015 enjoyed its most successful edition to date as its doors closed last week.

As the Middle East region’s definitive platform for the commercial and package printing industry, 2015’s edition of the show posted a 26.7 per cent rise in visitor numbers, with a footfall of 11,918.

Running from 13-16 April at Dubai’s World Trade Centre, its registration data showed that visitors came from 110 countries (compared to 93 in 2013, 83 in 2011 and 65 in 2009), underlining the show’s growing importance in the wider MENA region. While the majority of visitors (both onsite and pre-registered) came from the UAE, the wider MENA regions also put forward good visitor figures, including Saudi Arabia, Oman, Bahrain, Iran and Kuwait. The event also attracted high visitor levels from India, China and Pakistan.

“This year’s show was unquestionably upbeat and was a real buying show with many exhibitors selling everything on their stands! The exceptional level of business being done on the exhibition floor firmly positions Gulf Print & Pack as the region’s largest and most effective exhibition for commercial and packaging printers, brand owners and industry suppliers.”

Andreas Hoffmann, of Primera Europe, added: “Gulf Print & Pack 2015 was a very successful show for us. The international show visitors were very interested in the different printing solutions Primera is offering. So we are expecting a great demand for our dry-toner and inkjet-based label printers in the United Arab Emirates and the neighbouring countries.”

Industry stars take to the stage at Packaging Innovations…