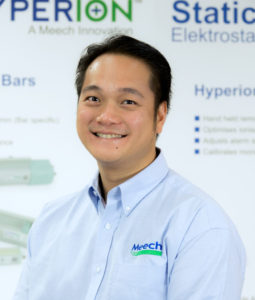 UK-based Meech Static Eliminators has established an office in Singapore to provide local support to its distributors and increase sales of its web cleaning, static control and MAT (Meech Air Technology) systems in Southeast Asia. Meech has also appointed Melvyn Chan as sales and operations director to drive sales and manage operations across the region.

“As reflected in our international sales, Meech has identified substantial growth in the region over the past few years and we are eager to support areas across the globe that are showing real potential — Southeast Asia being one,” said Chris Francis, CEO of Meech Static Eliminators. “We have worked alongside distributors in these territories for many years and we believe now is the right time to capitalise on the growth in the region and offer these distributors a greater support network.”

Melvyn Chan has spent over twelve years working for a local distributor, and so is a suitable choice for heading up Meech’s new division. Chan has extensive knowledge of the plastics, packaging, print and converting industries, among others.

Speaking about Chan’s appointment, Francis added, “Melvyn’s knowledge of Meech’s products and the markets in this region will prove invaluable as he takes on this new role. After many years supporting us as an accomplished distributor throughout Malaysia and Singapore, we’re delighted to welcome him to the team and I’m sure he will help deliver profitable and successful results.”

Melvyn Chan said: “It is a great pleasure to be taking on the role of sales and operations director for Meech Singapore. This is an exciting opportunity to work at a company that continues to expand into new sectors across the globe. Southeast Asia is an emerging market in a developing part of the world, which means that a strategically located office will facilitate Meech to deliver the technologies and product ranges that are sought after in the region. This plan is in line with Meech’s vision and mission of being the leading ‘global partner for static control, web cleaning and air technology’.”