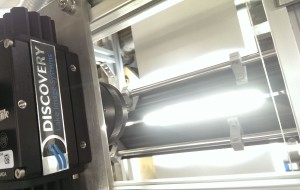 The existing vision system consisted of four low-resolution cameras which were proving to be problematic and unable to meet the stringent inspection demands put upon them. These were replaced with one advanced 8K linescan camera from Lake Image Systems, capable of scanning the full width of the web at significantly higher resolutions, improving overall readability and enabling superior operational flexibility and efficiency.

Previously, misreads of critical data printed on the card had resulted in the vision system stopping the press, severely impacting press productivity and reducing operator performance. Lake Image’s Discovery Multiscan software, with intelligent IQ functionality, provides intelligent data matching, ensures that even cards printed using a low resolution inkjet print head can be correctly read and the data captured can be reconciled against the original datafile or database.

When an error is now detected, the nature of the error and its location on the web is precisely logged for subsequent offline inspection. The operator is alerted via a light and buzzer alarm without stopping the press.

“The old vision system we had was giving us a few headaches” said Ngo Manh Hung, general director at VNPT. “Since implementing the system from Lake Image, we have experienced fewer stoppages, resulting in better overall productivity as well as greatly reducing the setup time we had to allocate for each job.”

Paul Stinson, vice president of sales at Lake Image Systems, added: “With camera technology advancing so rapidly, we constantly strive to take advantage of the benefits that they bring. We are delighted that VNPT has chosen us for their inspection needs and how our system has helped them in streamlining their production processes.”