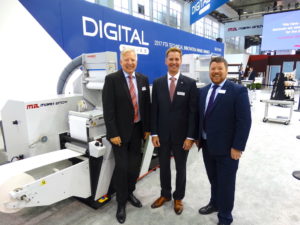 The Mark Andy stand at Labelexpo in Brussels marked a significant highlight in the cooperative partnership between an American narrow web press manufacturer and a Danish pioneer of surface treatment.

The VE1A corona treater fitted to the Mark Andy Digital Series press on working demonstration was the 10,000th narrow web unit to be built by Vetaphone. Speaking for the company, CEO, Frank Eisby, said, “With almost 70 of our units working, or on static display at the exhibition, we are delighted that number 10,000 was fitted to a Mark Andy press, it is a great example of two top brands working together.”

Vetaphone’s agreement with Mark Andy is as recent as 2014 when the press manufacturer elected to make the Danish company its preferred supplier of corona treatment for all European presses.

Speaking for Mark Andy, VP sales and marketing, Steve Schulte, said, “Mark Andy needs to choose its co-suppliers carefully so they match our own exacting standards of design, engineering, and reliability. We are delighted to have Vetaphone on board and are very proud to have their 10,000th narrow web unit on our Digital Series line in Brussels – it seems appropriate that we came together at the right time!”

On the final day of Labelexpo, Mark Andy confirmed the sale of the Digital Series show press to The Watershed Group in Ireland. It will be installed at the Group headquarters in Dublin in October.