Impression Technology Europe Do It Again 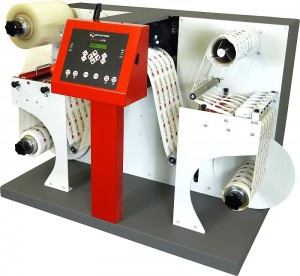 The LF350 is the larger brother of the well-established LF3 which was one of the first table-top style finishing machines to deliver big output figures for such a small unit. Within weeks of its launch it had broken into established markets worldwide although that is not surprising when you see specifications that include a cut width of 100mm to 220mm, a maximum cutting speed of 800mm ps axial, single point registration and lamination facility as standard. Its compatibility with all narrow web label printers has helped ITE establish it in a variety of print shops and its industrial standard build quality has made it the number one digital label finisher in many people’s eyes. As good as the LF3 was though, and still is, it was originally designed to give the small order market printers the same finishing ability and quality as larger label producers. Not known for standing still ITE quickly recognised this and set about developing a machine that would bridge that gap with a cross market model that would sit just as comfortably with the one-off style order as it would with bulk quantities – enter the LF350. 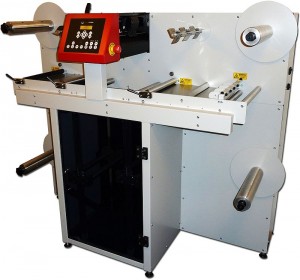 Only recently launched this machine may be new to many of you but it deserves a lot of attention. As the name suggest one of the key differences with this model is the web width it can handle which has been increased to 350mm. It also has an increased output speed of up to 5.1 metres per minute but this can be doubled when used in ‘twin cutting head mode’. Each of the two standard knives can be independently controlled and so can cut to different knife depths giving the machine added flexibility. Both supported and unsupported laminate is easily handled with any carrier waste being included in the ‘waste matrix’ removal system that is standard with this machine. Add to these features double dancer bars for paper feed with positional intelligence and you can see that this machine stands apart from anything else on the market. As with the LF3 it is built to industrial standards and so is ready for the rigours of high output production. Both models arrive with WinPlot cut software with plug-ins for popular graphic software such as Corel Draw and Adobe Illustrator and so should easily slot into any production environment. The key to the success of these machines is the amazing value for money that they represent. They may be high spec’ and built to demanding standards but ITE still manages to offer them at very competitive prices. For productivity against investment there are few, if any, competitors to the LF3 and LF350. 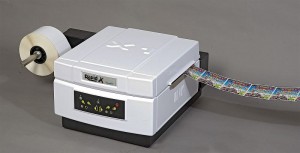 As well as digital finishing machines ITE also have in their catalogue digital printing machines such as those from Australian based Rapid. This company has become well known for their use of the in-line print heads from Memjet and were the first to design a true table top digital label printer that could just as easily handle single labels as bulk orders. The X1 and the X2 are well known in this field but these are both aimed at industrial production. The new X1 Lite, although based on the X1, is aimed at environments where cost is an important issue. This stand-alone desktop label printer is small enough to operate in an office environment as well as areas such as retail outlets. It is supplied with a standard roll label holder, moveable label gap or mark sensor and an end of roll or sheet cutter. In fact all it needs to start producing is label stock – either precut and stripped shapes or blank media – it is ready to print out-of-the-box. Adding the optional fan-fold pack feeder enables pack to pack printing of suitable fan-fold stationary labels in brilliant CMYK inkjet colour. Although aimed at a specific environment the X1 Lite has a customisable I/O interface meaning that it can be integrated into existing equipment or used to add digital printing to one of Rapid’s flatbed platforms. This machine really is unique in the industry and should be considered by anyone looking for high quality output combined with low noise and cost. Outlets that regularly attend exhibitions for instance may find the Rapid X1 Lite the perfect machine.