Responding to the rapid need for food factories to use sustainable packaging materials, Ilapak UK has successfully adapted one of its vertical flow wrapping systems, the Vegatronic, to run a new compostable film 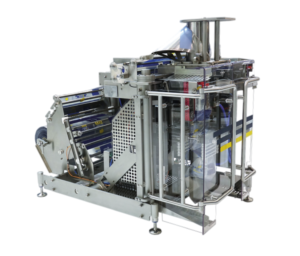 Following this breakthrough, Ilapak plan to modify its entire fleet of over 50 vertical and horizontal systems and offer an upgrade option to existing customers wanting to switch to environmentally friendly substrates.

From government through to consumers, the nation has waged a war to stamp out the use of non-recyclable plastics packaging*. Although sustainable polymer-based films are readily available, it is widely acknowledged that flow wrapping machines struggle to achieve a consistent pack seal due to the challenging characteristics inherent with compostable materials. Working together with innovative UK materials manufacturer Four04, Ilapak’s R&D department has developed a breakthrough heating techniques and a new sealing jaw coating to successfully seal EVAP – a clear, high-gloss film which offers a high moisture vapour transmission rate (MVTR) and is compostable to the EN 13432 standard.

Tony McDonald, Sales and Marketing Director at Ilapak explains: “When you’re running standard oriented polypropylene (OPP) films, it doesn’t matter if the sealing jaw temperature varies by 10deg C or so. But to consistently seal a sensitive film such as EVAP, the jaws have to be non-stick. The heat has to be balanced across the element and you need accurate temperature control.”