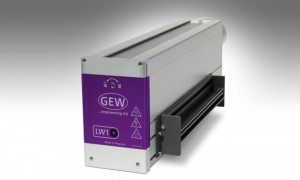 At Labelexpo Europe 2015, GEW will introduce ArcLED hybrid UV technology, which enables an investment in an arc lamp system now to be upgraded later with LEDs using the same lamphead casing and the same power supply and control.

The printer simply adds LED cassettes, connects water-cooling and the RHINO ArcLED power supply automatically recognises which type of cassette is installed in the machine and then on the same press seamlessly switches the power supply. ArcLED gives the operator maximum freedom and flexibility and will thereby avoid getting locked in to one type of curing technology.

As well as this, GEW will be holding its own live debate on the shared future of arc and LED UV.

The press conference will be held on Thursday, October 1 at 11:00am in the Press Centre at the show. The speakers are Marcus Greenbrook, the company’s international sales manager, and Rob Rae, technology development manager, and they will talk about how GEW has addressed the needs of many printers by developing what is said to be the first truly future-proof hybrid UV curing system.

SO Recycle Promotes Print Services At The Print Show