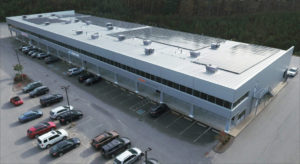 Flexo Concepts announced that it has completed the installation of a solar renewable energy system. The system ‘went live’ on October 17, 2017 and the building occupied by the company is now 100 per cent powered by solar-generated electricity.

Last fall, company owners Kevin McLaughlin and Greg Howell hired Hopkinton-based Solect Energy to do a solar feasibility study for the multi-use commercial property housing Flexo Concepts and several tenants. The study confirmed the economic viability of the project, and Solect began work on the development, design, engineering, construction and interconnection of a solar energy system.

Installation, which included 850 panels on the roof, 40 power inverters and all materials required to connect the energy to the building and electric grid, was completed over a five-month period. The system generates 290kW of power — equivalent to the electricity used by about 30 average-sized homes in the US — and powers all lighting, heating, air conditioning, and machinery and equipment for Flexo Concepts and the co-located companies.

The solar project is part of a bigger Flexo Concepts’ initiative to ‘go green’. In 2016, the facility was outfitted with LED lighting, a move that resulted in an annual reduction in energy use significant enough to power six homes for a year. The company also recycles about 80 per cent of its blade material scrap along with all its cardboard waste and employee food packaging.