Following the installation of the first of two recycling lines type recoSTAR dynamic 165 C-VAC in Houston, Texas, Avangard Innovative LP is now ready to start processing of post-consumer film at its new recycling plant. Depending on filtration fineness, the line achieves an output of up to 3,300lb/hr. To ensure that the regranulate not only performs but smells like virgin material, both lines are equipped with Starlinger’s odour reduction technology High paper content as a challenge 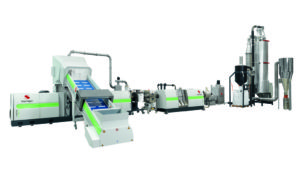 Avangard’s material comes from retail packaging film that contains a high amount of paper labels. The initial goal of the test run at Starlinger’s technology centre was to remove as much paper contamination as possible with minimal melt loss. Processing went smoothly, but when the client inspected the material in the US, it was discovered that the pellets had taken on an unpleasant odour. An investigation showed that the smell had been caused by the exposure of paper residues to heat during the extrusion process. Consequently, Avangard asked an additional requirement of Starlinger’s technology: production of odourless recyclate.

“Starlinger is exceptionally flexible with regard to machine setup,” explains Paul Niedl, Commercial Head of Starlinger recycling technology. “In quite a few projects, this has worked in our favour.”

LDPE film was obviously not a challenge, but the high paper content called for an extension of the line with an extra process step: odor reduction. Through optimal preparation of the material in the SMART feeder and excellent degassing in the C-VAC module, this process already extracts a large part of the smell during extrusion, and the Smell Extraction Unit (SEU) further enhances the quality of the final pellet.

Avangard Innovative has a long history in trading LDPE film that it obtains from a variety of sources, and expanding into processing this film seemed like the next logical step. In March 2017, the company announced the opening of a brand-new LDPE film recycling plant for post-consumer waste at its existing facility in Houston. A major reason for venturing into film recycling is availability of input material – an evaluation of material streams showed PE film to be available in large quantities (up to 100 million pounds of film per year). Another reason is the advancement of recycling technology over the past years; due to cutting-edge extrusion and filtration systems, washing is no longer an absolute necessity for the recycling of post-consumer film. With a second Starlinger line being installed early this year, Avangard is all set to supply the US market with odourless, high-quality regranulate. “Starlinger has been a great partner throughout this entire process, where we collaborated on the line for our particular needs to find the best options to complement their extrusion technology to have a complete system. We feel with the entire system in place including the Ettlinger continuous rotating filter and optical sorting in conjunction with the Starlinger recycling line, we have the best opportunity for success in the marketplace,” says Jon Stephens, Chief Operating Officer at Avangard Innovative.

Axion: Are biodegradable plastics better for the environment?