Everything needs a box 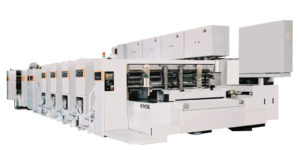 The age of the internet is a truly wonderful thing: one can pretty much buy whatever you want from wherever you are in the world and have it sent to you.

From books, food, fine wines and toys to car parts, clothes, make-up and wallpaper, the list of things you can have sent from the likes of Amazon, eBay, Alibaba and Rakuten is endless.

But one aspect of e-commerce we take for granted is the packaging. It’s a simple but profound thought when you let it sit in your mind for a minute.

Everything needs a box. Without the boxes, the whole system simply would not be able to function. And these boxes are made out of a specific material called “corrugated cardboard.” In fact, so important is this unsung hero to the development of the fourth industrial revolution that the global brown-box making industry is predicted to be worth $204 billion by 2023, up from $169 billion in 2017.

But continuing to develop corrugated cardboard-making technology, particularly to produce more it, at a faster rate, and in more flexible designs will be essential to keep pace with the trends we’re seeing in the e-commerce world, to which the corrugated cardboard industry has a deeply symbiotic relationship.

E-commerce is at an inflection point

According to a report in The Economic Times, the e-commerce industry is going through an inflection point which is largely driven by an increasing number of mobile (smartphone) shoppers. The ability to shop from our phones has caused explosive growth in the e-commerce industry. And not just in the developed world.

According to the International Telecommunications Union’s Facts and Figures for 2017smartphone penetration in the developing world hit 98.7 percent in 2017. The base of consumers with the potential to shop on impulse with a few taps and swipes of their fingers is now broad and deep.

Keep one eye on India

In fact, by 2034 India is expected to surpass the U.S. as the second largest e-commerce market in the world (second only to global e-commerce juggernaut China).

And another eye on Latin America

Latin America’s flourishing e-commerce market heralds boom times ahead for the corrugated cardboard industry. Brazil, the largest market in the region, had retail e-commerce sales upwards of $16 billion in 2017. No one expects this number to go anywhere but up as digital payment options and wider credit card options become available to Brazilians.

One of the most appealing things about boxes to manufacturers and marketers is that they can carry printed messages, meaning branding can be easily placed in front of consumers.

The ability to add coloured dyes for bespoke orders, combined with the agility of modern box-making machinery to change the size and shape of boxes at high speed and for variable quantities, offers the potential of greater personalisation for the final consumers.

Then there is the potential for highly targeted ads on the boxes. Just like Google surfaces incredibly relevant ads for users because they have the prior information of what you searched for, advertisers will be able to select and tailor ads to consumers with the prior knowledge of the ad being physically next to an item the consumer has already purchased.

Environmentally friendly at the right time

As well as being strong, light and easy to produce, corrugated boxes have strong environmental credentials. They are 97 per centrecyclable and can be produced from recycled materials. About 29 million tons of corrugated cardboard is generated annually in the US, and more than 89 per cent of this was recycled in 2014, according to the Environmental Protection Agency.

MHI are working furiously to improve the quality, reliability and quantity of its corrugated cardboard-making machines. Because, as we’ve seen, the world is going to need a lot more boxes.

ACA adds nesting capacity to meet demand from the packaging…