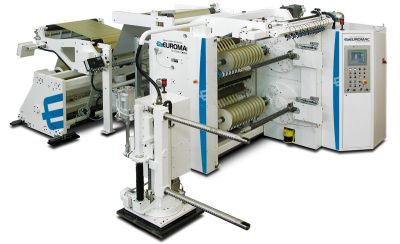 Euromac, one of the leading producers of high end slitter rewinders, reports that 2013, their 45 anniversary year, is foreseen to be an absolute record year in respect of revenue and  manufactured machines.

Their 130 sq/m stand during the K’13 (Hall 3 – D33) is packed with the latest Euromac innovations. The company is aiming to overcome the success of the past edition by round the clock demonstrations of all their most successful models like Duplex and Double turret slitters of the    TB-3 series and Centre(Surface) slitters on interactive large LED projector screens and demonstrations of one of their top selling slitter rewinder machines.

The TB-3T2 slitter rewinder exhibited on the stand is part of the successful Euromac series TB-3 which includes Duplex and Duplex turreted slitter rewinders with very high performance.  With its 700 m/min working speed and low downtimes of less than 40 seconds this machine is configured to increase Customers productivity and decrease operator’s working load. The machine allows to rewind finished rolls and extract the automatically on the offloading device and is forecast to position the cores also in automatic sequence.

Euromac’s TB-3T2 Duplex turret slitter rewinders have the peculiarity to be modular and upgradable according to Customer specification as well as having a great amount of possible options related to both ergonomic work as automation. The machine can i.e be equipped with full automatic knife setting system, full automatic core positioning, full automatic offload system. The machine like all Euromac machines is equipped with the highest class electronic, pneumatic, and mechanical components for highest reliability.

Additionally on the stand Euromac will show graphical presentations of  the Primary Slitter Rewinder TB-8 series featuring 7.000 mm web width which will be assembled shortly after the fair and that is likely to be the subject of open house in the main factory of Villanova Monferrato.

TB-8 series is a family of Primary Slitters suitable for film applications from 4.200 m to 8.000 m wide webs. The machines which are mainly used in the CPP, BOPP and BOPET range of films feature a extremely robust structure though maintaining a very sensible tension control.

Visitors are invited to learn about these and many other news related to Euromac and share their slitting experiences traditionally in the enjoyment of a good cup of espresso or a glass of Barbera wine. Invitations, and any requirement for appointment to the fair can be requested at the Euromac commercial department.

Euromac produces slitter rewinders since 45 years with over 1600 machines sold worldwide. All the machines are manufactured and assembled in the main plant of Villanova Monferrato – ITALY.