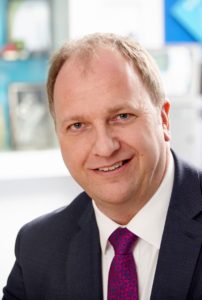 Domino Printing Sciences has announced that Paul Doody, its global marketing director, has passed away.

Paul took up this role with Domino in January 2016, drawing on his extensive experience to define and drive effective marketing campaigns. He passed away on January 11, 2017.

Paul had a varied and distinguished career that saw him manage European projects at Unilever and take on global marketing responsibilities at Linx Printing Technologies. He brought a wealth of experience to his role at Domino, along with a healthy dose of enthusiasm and creative flair. He played a key role in the launch of the Ax-Series, Domino’s new range of CIJ printers, which debuted at PackExpo on the November 1, 2016.

David Bywater, group product director at Domino Printing Sciences, said: “Although only with Domino for a year, Paul made a huge impact on our business both at a personal and a professional level. We will all miss him as a friend, a colleague and a true marketing professional.”

A memorial service was held in Paul’s honour in Cambridge, on January 25.