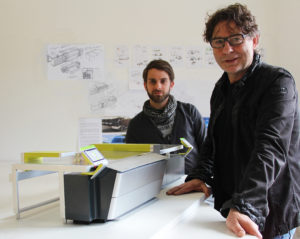 Submissions were received from 54 countries, and all entered products were assessed by an independent international jury of more than 40 specialised design experts from various subject areas. They assessed the entries for three days both live and on-site, determining that Esko’s design was one of the best in the industry.

The modern design, outstanding ergonomics, ease of use and innovation incorporated in the CDI Crystal 5080 XPS caught the judges’ attention, especially with regard to addressing customer requirements in today’s demanding flexo industry.

designship’s managing director Thomas Starczewski says, “We were delighted to win the Red Dot Award with this design for Esko. It’s a major achievement that was only possible thanks to the great and in depth partnership we had with Esko’s development team on the Crystal project. We are pleased to share with Esko the honour we receive from well-respected design experts and to join the esteemed community of previous winners, including HP, Polycom, La Cimbali, Bosch and others.”

Thomas Klein, Esko’s vice president hardware explains, “Esko has pioneered digital flexo plate making for more than two decades, and the industry recognises us as the clear market leader for delivering flexo plates with the highest quality and consistency. We have had a few product redesigns in the past. And now, based on past experience, market trends and an understanding of customer needs, we have developed this flexo plate-making concept that simplifies the digital flexo platemaking process. We have focused on improving the ease of use and ergonomics for the operator, which is handled through the hardware design as well as through the operator software interface. designship helped us by translating this concept into the brilliant design for the CDI Crystal 5080 XPS.”

He continues, “This solution rethinks flexo platemaking altogether. The previously rather complex and manual process often involves up to six different processing steps and runs the risk of damaging the plate or using the wrong parameters when moving from one step to the next. With the integration of multiple steps and automation of the platemaking process, quality, consistency and ease of use were all significantly improved. This enables our customers to more efficiently manage the flexo platemaking workflow and results in higher quality printed output.”