Comexi expands its position in Africa 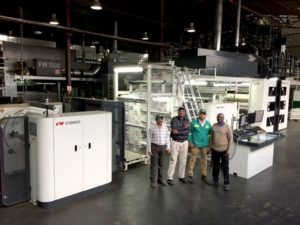 Comexi, specialist in solutions for the flexible packaging industry, is expanding its presence in Africa. The group has installed a new Comexi F2 MB at Natpak’s facilities in Zimbabwe, Africa a clear example of the overall growth strategy that the group is developing.

“Since 2015 we have strengthening our position in the African market, which has tremendous potential. Our vision is to become Africa’s preferred supplier,” added Comexi’s area manager of Africa, Miquel Gironès. “We are achieving great results with sales in countries like Zimbabwe, Ivory Coast, Algeria, Morocco, South Africa, Ghana and Mauritius.”

The purchase of a Comexi F2 MB flexo press by Natpak enterprise, a top company located in Harare, Zimbabwe, Africa produces a variety of products for different flexible packaging sectors.

Founded in September 1981, Natpak expanded to Harare in 1994 and has grown from being a woven polypropylene manufacturer to encompass other packaging materials such as LDPE.

The relation between the two enterprises dates back to 2014 when the African company acquired a Comexi FW flexographic press. Three years later, the enterprise has reinforced its confidence in Comexi by purchasing a F2 MB – the evolution of the FW press – to boosts its productivity.