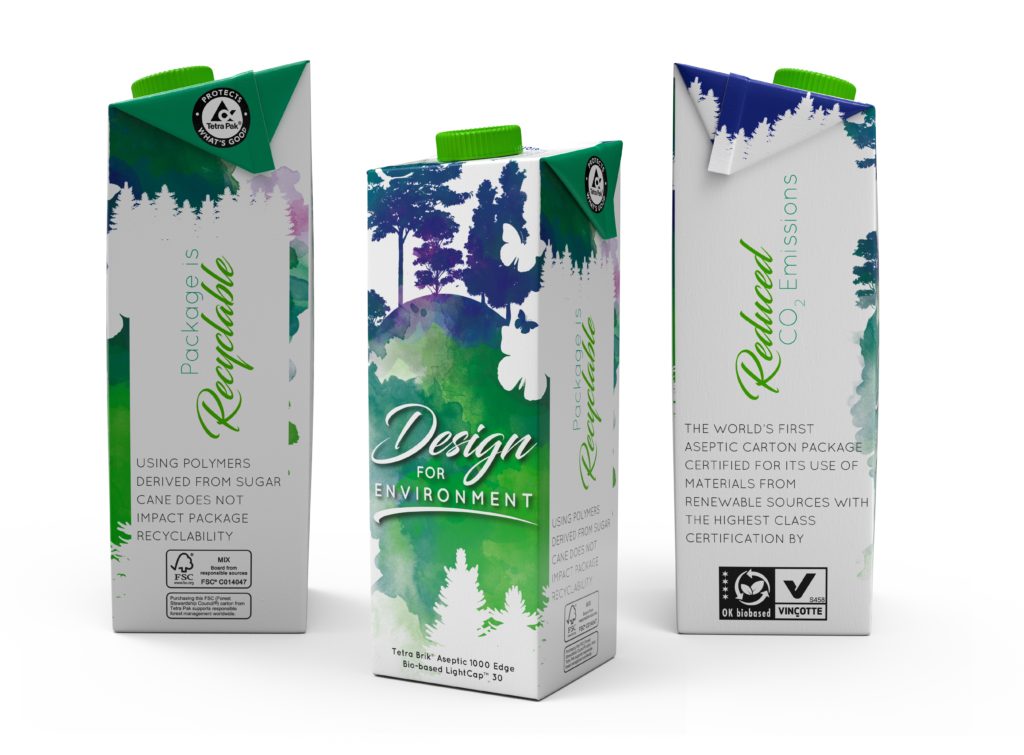 Inside this month’s issue: Tetra Pak has revealed its latest version of the Tetra Brik Aseptic carton as part of its goal to only use fully renewable materials for its packages, which comes under the company’s aim to further drive environmental excellence.

The new Tetra Brik Aseptic (TBA) 1000 Edge with Bio-based LightCap 30 from Tetra Pak is being hailed as “a significant milestone” on the company’s journey towards producing all of its packages using only sustainably-managed renewable materials. It is also the first aseptic carton package in the world to receive the highest class of Vinçotte certification for its use of renewable materials.

The new package is manufactured using a bio-based plastic film and cap, made from polymers derived from sugar cane. Combined with the paperboard, this lifts the share of materials from renewable sources in the package to above 80 per cent, the threshold for four-star certification from Vinçotte, the Belgium-based accreditation agency.

The TBA Edge package (pictured) also boasts up to 17 per cent lower carbon footprint than a standard package, according to an independent lifecycle analysis conducted by IVL Swedish Environmental Research Institute. The complex packaging structure that makes up a TBA Edge package ensures that the contents are protected without being chilled. One of the middle layers is aluminium foil and this acts as a barrier to protect the product from oxygen and other external factors. Two of the other layers have been replaced – as with the sister chilled carton version, Tetra Rex bio-based – meaning 80 per cent of it now uses renewable materials.

Tetra Pak has converted around 13 per cent of the fossil-based polymers used in the TBA Edge carton to bio-based polymers; the remaining 13 per cent of fossil-based materials and aluminium foil used are in development to be replaced too. On top of this, next year the company is planning to build on this further; it will look to also produce the neck of the LightCap 30 from renewable bio-based materials.

The company says this will be achieved through partnerships with its suppliers to develop new materials, which are not currently available, as an industrialised solution for carton beverages. Its long-term ambition is to introduce a fully renewable aseptic package.

Speaking exclusively at Tetra Pak’s facility in Modena, Italy, in December, Davide Braghiroli, the company’s manager for product environmental performance, explained that replacing the carton’s aluminium barrier layer is the biggest challenge. “For our customers’ needs aluminium is the best choice, but when we find something else, this needs to offer the same level of protection while not compromising on functionality and performance in terms of stiffness and distribution.

“We are looking at the technologies that will take us to the next level, not just stopping at 80 per cent but going as close to 100 per cent renewability as possible.”

Read the full article in the December/January issue of Converter.