Foil for Snappy, the York-based community initiative renowned for collecting aluminium packaging to raise money for charity, has announced its best-ever year for packaging volumes.

During 2020, the programme collected 5,482kg of recyclable material, including 2,843kg of aluminium foil and 1,459kg of aluminium drinks cans – its highest-ever rates. With material sold to raise money for The Snappy Trust, which supports children and young adults with wide-ranging disabilities, the initiative prevents recycleate from being landfilled, while raising much needed funds alongside!

Despite the ongoing impact of the COVID-19 pandemic, local residents have shown their community spirit by donating aluminium packaging to support the cause. Due to its continued success, Foil for Snappy was even asked to take over the collection of foil at the city’s two HWRCs early in 2020 to ensure the aluminium continued to be recycled when the previous service provider could no longer continue.

Foil for Snappy founder Karen Nash commented: “We are delighted to have seen such an impressive increase in the amount of aluminium collected by Foil for Snappy. With material arriving at our supermarket car park collection bins or directly to my front door throughout the pandemic, I would like to personally thank local residents for supporting the scheme and helping to raise much needed funds for The Snappy Trust.” 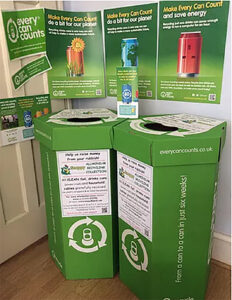 Rick Hindley, executive director at Alupro, the aluminium packaging recycling organisation, added: “Record rates is great news for Foil for Snappy – Karen’s fundraising efforts are truly inspirational. However, while volumes have been high, a significant proportion of the donations were unfortunately unsuitable for recycling, consisting of mostly plastic laminate and bonded paper packaging. This highlights why it’s so important to take care when separating materials for recycling – not only to prevent contamination, but to maximise recycling rates.

“While Foil for Snappy is grateful for donations from other counties in the UK, they would ask those residents not to post their aluminium foil to them as they are ending up having to pay the postage for these packages. It’s important that residents research local recycling schemes closer to home, which will reduce your personal costs and also reduce the impact on the environment due to the packaging travelling fewer miles to be recycled.”