Yesterday I stopped by the BOBST stand at drupa (Hall 10 Stand A60) – although rather than a stand, it’s more like a village! I went to see the unveiling of the company’s latest innovations, which include some huge products for key cutting, folding and packing operations. 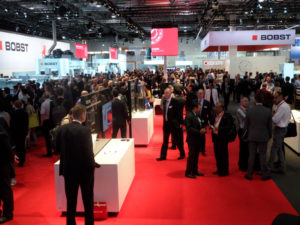 Hall 10 has been buzzing with activity since the doors opened at drupa, largely due to the attraction of the BOBST arena and its regular product demonstrations. There was a sea of people across the stand when I visited yesterday as people gathered to learn more about what was on show and watch the machines in action.

One of the company’s biggest debuts at this year’s exhibition is the all-new MASTERCUT 106 PER die-cutter, a completely redesigned press featuring a wide range of new and improved systems for die-cutting productivity and ease of operation. Systems include the new, enhanced SMART FEEDER 3 and POWER REGISTER 3, which together ensure high uptime and high speed running. The new MASTERCUT also features new ‘MATIC’ machine setting for the highest degree of automatic operation available on any die-cutter, and a completely new HMI (Human Machine Interface).

Also on show is the BOBST MASTERFOLD 110 A3 folder-gluer, which brings new levels of productivity to the folding and gluing of cartons. Available in two widths, 75cm and 110cm, the completely redesigned MASTERFOLD features running speeds of up to 700 m/min, increased automation, up to 15 per cent faster set-up, a 10 per cent increase in throughput, added versatility in the types and styles of packaging it can handle, and a re-thought safety concept centered on the operator which is complemented by a 10 per cent reduction in noise.

At the end of the MASTERFOLD 110 line features an automated intelligent packing machine, CARTONPACK 4, which can pack more than 200,000 boxes per hour and can run for up to 30 minutes without an operator.

Also making its world premiere, the BOBST MASTERFOIL 106 PR hot foil stamping press with FOIL UNWINDER+ module is running in demonstration on the stand of it’s industry partner, Leonhard Kurz. The unit features a number of intelligent processes that together ensure extremely accurate foil advance, with the least possible stress on the web. By constantly self-adjusting during production, FOIL UNWINDER+ allows the press to run with a gap as small as 2mm between impressions on the foil, regardless of running speed, reel size or reel width.

You can read more about each of these new systems from BOBST on the Converter website very soon.

Metsä Board brings PE-coated paperboards to the market