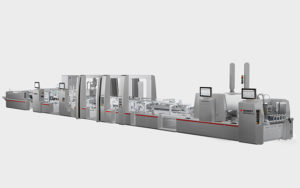 drupa 2016 has seen the premiere of the all-new BOBST MASTERFOLD 110 A3 folder-gluer. Available in two widths, 75cm and 110cm, the completely redesigned MASTERFOLD features running speeds of up to 700 metres per minute, increased automation, up to 15 per cent faster set-up, a 10 per cent increase in throughput, added versatility in the types and styles of packaging it can handle, and a re-thought safety concept centred on the operator which is complemented by a 10 per cent reduction in noise.

The MASTERFOLD 110 A3 on display at drupa 2016 features new and updated versions of many BOBST folder-gluer technology modules, including EASYFEEDER/BATCH INVERTER, ACCUCHECK and SPEEDWAVE as well as CARTONPACK, the latest version of which can save 20 per cent in labour costs by its use.

Jacques Reymond, head of product marketing for BOBST’s business unit sheet-fed, commented: “We believe that the new MASTERFOLD answers customer concerns about how they can decrease setting times to cope with reducing run lengths and how they can achieve the high net outputs they need to maintain margins. This new machine can perfectly fold and glue more than a million boxes in a single shift. Yet the setting and running of such a powerhouse machine has never been easier or quicker thanks to a host of new systems that we have developed.”

On the new MASTERFOLD models, both the machine and any BOBST peripheral equipment can largely be set fully automatically, based on the job data entered, so reducing job set-up times to the strict minimum. Stored jobs can be recalled on the new Human Machine Interface (HMI) that also saves time during make-ready.

The entire folding and gluing process depends on the accurate and consistent entry of blanks into the machine. This is ensured on the new MASTERFOLD by the proven ACCUFEED unit with integrated blank aligner. Automating the feeding process on the MASTERFOLD line at drupa is EASYFEEDER/BATCH INVERTER 4 – which builds on BOBST’s 30-year experience in developing pre-feeders. This latest generation allows feed-end operatives to be more productive.

The new ACCUCHECK 2 is another highlight of the MASTERFOLD premiered at drupa. This optional module is one of the only in-line quality control systems available in the market that gives carton makers 100 per cent checking of their products at the high speeds today’s lines need to run at. This allows them to service clients that have ‘zero-fault’ requirements, such as pharmaceutical and cosmetics brands, and, increasingly, those in liquor, food and other markets.

ACCUCHECK 2 inspects cartons at speeds of up to 500 meters per minute. This new model also features: checking of embossing; inspection of foil-stamped or very reflective surfaces; and also has an all new blank cleaning device, exclusive to BOBST.