Asahi Photoproducts, one of the leaders in flexographic photopolymer plate development, was recognised with a 2016 Gold Award for sustainable manufacturing and product innovation by the European Flexographic Industry Association (EFIA) for its Pinning Technology for Clean Transfer. 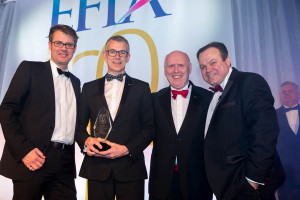 “We were thrilled to be recognised with this prestigious award,” said David Galton, sales director of Asahi Photoproducts Europe. “The test press run we performed delivered unequivocal results that validate the value of Asahi plates in an environment where flexographic printers are under increasing pressure to both deliver improved efficiencies and reduce their environmental footprint. It is gratifying to have the judge’s agree that Asahi plates with Pinning Technology for Clean Transfer are contributing to the ability for flexo printers to meet these market demands.”

Asahi conducted the test under controlled conditions to validate the impact of Asahi polymer innovation on overall equipment effectiveness in a flexo printing environment. A single-colour test form was developed that incorporated both vignettes fading to zero and solid coverage. The image was produced using a conventional solvent plate and a Pinning Technology plate on a CI flexographic press set to standard printing condition. The same equipment was used for both plates (anilox, tape, ink). The substrate used was OPP film and both tests used a conventional NC solvent-based ink.

Galton added: “The significant contributing factors were that the Pinning Technology plate completed the run length 33 minutes faster than the conventional plate. The Pinning plate required less press stops for cleaning, saving 39 minutes. The Asahi plate produced 575 linear meters less waste material. And the Pinning plate produced higher print quality (lower dot gain) with more print contrast. We are quite proud of these results and the benefits they signify for our customers.”

Asahi Photoproducts will be exhibiting at drupa at the end of May in Hall 11, Stand A60.

Domino to feature expanding range of technologies at drupa