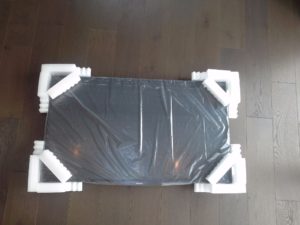 Antalis Packaging has worked with a leading British supermarket chain to develop a packaging solution for TV returns, saving the retailer hundreds of thousands of pounds per year.

With a number of customers returning TVs to store, within the warranty period with minor product issues, the retailer was faced with the challenge of managing an incredibly costly returns process. The onward process of sending faulty or damaged TVs to the returns centre, often without the televisions’ original packaging, meant that whilst some TVs left the supermarket for the returns centre as a high value re-saleable item, they would arrive as completely non-sellable due to further damage incurred in transit.

Antalis Packaging, one of the leading suppliers of protective packaging solutions, began working with the supermarket chain to provide online packaging solutions in early 2016. The team became aware of the issue with TV returns and partnered with them to create a solution to protect the product in transit back to the return centre.

Scott Byrom, key account manager for Antalis Packaging, comments: “As part of our contract with our client, we supply packaging for a whole range of products, including TVs. After we came on board, the issue with TV returns was coming to a head. Both ourselves and the retailer knew there had to be a way to reduce the damage, and consequently the cost, through a better packaging solution.”

Early investigations quickly identified that the boxes being supplied for television returns had been the same for a number of years. With five different size options, the boxes were designed for the old CRT TVs but were being used for today’s plasma screens. For the store, those boxes were the only means of packaging for the TVs to be returned to the return centre. This often resulted in four or five TVs being placed in one box, which frequently smashed or damaged the screens.

Four box sizes were determined to fit the range of TVs, within which the internal protection solution was a polyethylene foam; a dense foam product which can be used to make bespoke shapes to create end caps, protecting the product from any drops or other impact. As well as being able to cushion the TVs, a removable foam piece was designed to fit the plug, as all too often a loose, exposed plug in the box has resulted in a smashed screen. Once outer box sizes were correct and foam inner fittings deemed suitable, a trial was launched in one of the store’s branches.

Antalis worked with the in-store team to look at every step of the current process to send TVs back to the return centre including how they were placed on the pallet (face up or face down), other items being sent back at the same time and any potential impact this might have, for example, unnecessary weight bearing. These investigations revealed that, as part of their logistics network for food, clothing etc., they used a ‘comp’ in-store, i.e. a cage on wheels. The store had these in abundance and Antalis began to explore with the retailer’s employees if these could be used instead of pallets to transport the TVs.

After a six-week project, the final boxes were supplied across stores nationwide. Feedback so far has been positive, and it’s win-win from the retailer’s perspective. The TVs are arriving at the return centre in the condition in which they left and resale volumes are considerably higher. Although the packaging is more expensive, it has the potential to save the company over nine times as much as the incremental spend each year.

The May digital edition of Converter is out now!