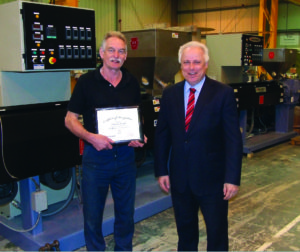 Dave Smith has worked at Davis-Standard in Brierley Hill, West Midlands, UK for 50 years, as a works engineer, and celebrated his golden anniversary with the company in April.

“It is an absolute privilege to honour such dedicated service. Dave is a diligent, hard working man who is well respected by his peers and customers alike. He is a pleasure to work with, and his work ethic is an example and inspiration to all of us,” said Mark Woodgate, managing director of Davis-Standard.

Smith joined Davis-Standard in 1967, when it was Brookes (Oldbury). He began as an apprentice, working on machinery for the automotive industry as well as bimetallic barrel and screw production for the plastics industry. Upon completing his apprenticeship, Smith became a maintenance fitter and was quickly promoted to maintenance foreman. In 2001, the company was purchased by Davis-Standard, LLC, and Smith’s duties continued to evolve and expand. Today as a works engineer, Smith prepares equipment for testing, conducts machinery rebuilds such as gearbox and die rebuilds, performs waterbath and downstream equipment assembly, and provides field services including borescoping.

“I’ve always enjoyed working with machinery because there are always new challenges and problems to solve. There has never been a day when I didn’t enjoy coming to work,” said Smith.

Smith’s longevity and extensive machinery knowledge has been an asset to Davis-Standard, a division of Davis-Standard, LLC. While the company continues to support barrel and feedscrew customers, which was Brookes’ (Oldbury) original market sector prior to acquisition, it is now more closely aligned to the core business of Davis-Standard. This includes the supply of extruders and downstream equipment for the EMEA (Europe, the Middle East and Africa) region as well as aftermarket support.

In addition, Davis-Standard recently added blown film die rebuild and cleaning services last year. These services apply to all blown film dies from Davis-Standard product lines and Heritage brands, including Gloucester Engineering Company. Services are available both on-site and off-site to ensure customer needs are addressed in a timely manner.

“Dave’s knowledge of our business and his ability to provide expertise for the entire scope of his work has been instrumental to our success,” added Woodgate. “We are grateful to him and for all he does on a daily basis to support customers.”